Yes, it’s been a while. I became very frustrated with the blogger and trying to add photos. Looks like some bugs are fixed. Maybe some in me are fixed, too.

This year was a tough one for fruit here in the high desert west. Late frosts killed most of the nascent fruit on apple, plum and apricot trees. Of 8 fruit trees, I had one that bore well. The others produced an average one fruit per tree.  The star? The nectarine with the thermal mass experiment (modified fruit wall).  I really did not put a huge effort into this. I gathered dark, local rock a few years ago and piled it in a ring just inside the drip line of the tree.  The fencing is to keep the roving deer from stripping the trees. They certainly get a tithe despite the fences! 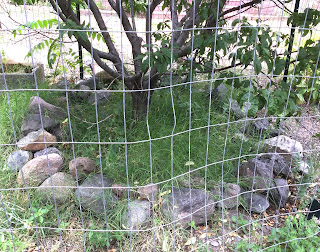 The next year, the tree was hit hard by white flies, so a few pieces survived, and they were ugly It was not a test, or at least not a successful one for the pile. Over the following winter, we hit the ground around our trees hard with a mix of diatomaceous earth, boric acid and powdered copper sulfate (mostly the DE).  We also sprayed the affected trees with a neem oil solution.

The nectarine tree bloomed heavily and the fruit set!  As you see in the photo, we are also experimenting with fruit bags rather than netting the whole tree. The jury is still out on that, as bagging more than a few of the fruit is tricky. 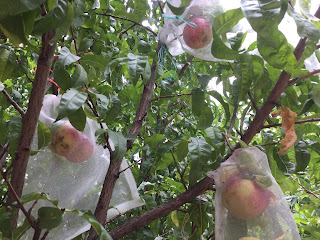 I believe the key variable was the thermal pile around the base of this tree. The reward is a crop of the best tasting nectarines ever. They are small, but sweet and juicy. I love it when a plan comes together.

Posted by Monsoon Matriarch at 12:30 PM

Monsoon Matriarch
Person generally interested in the simple mechanics, pleasures and management of a life of contentment and positive contributions without excess or complacency. I live in awe of God's creation and try not to be disheartened with what some are doing with their share of these gifts. What we have can be wrestled from us with little notice and needs our watchfulness. Army brat and Veteran. Country girl turned city girl, then back to country. Masters and bachelor's degrees in applied science from Michigan Tech and Dartmouth respectively. SITE DISCLAIMER: Products and retail outlets mentioned are based on my experiences with them. If I write something favorable, it is because I have had consistently good experiences. The buttons on the blog page are sites I endorse.